Today we celebrate the 50th anniversary of the first object-oriented programming language, Simula. It was solemnly marked by the unveiling of the IEEE milestone plaque – the first of its kind to be awarded to a Norwegian institution. A great honor for the University of Oslo and for the Department of Informatics! 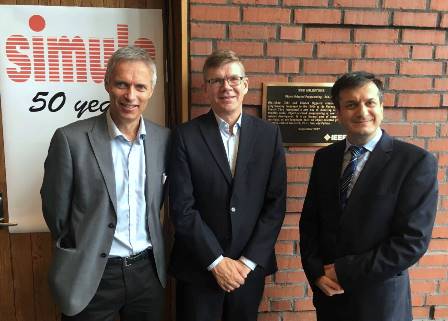 The story of Simula goes more than fifty years back, and it is one of the greatest innovations from the University of Oslo. The story cannot be told without telling the story of two extraordinary men, Kristen Nygaard and Ole-Johan Dahl.

In the early 1960s Kristen Nygaard worked as Research Director at the Norwegian Computing Center. He was involved in projects that required advanced mathematical simulations and soon realized that it was difficult to formulate these problems using any of existing programming languages at that time. At the end of the 1950s Kristen was employed as a mathematician at the Norwegian Defence Research Establishment, where he met and cooperated with Ole-Johan Dahl, who underwent his compulsory military conscription at their computing office. Kristen persuaded Ole-Johan to join him at the Norwegian Computing Center to help developing a simulation language.

This was the start of Simula, which evolved into a full-fledged programming language with language constructions that would turn out to be extremely versatile and robust. The central concepts in the language were called objects and inheritance, and provided a way of organizing and building software that should turn out to be revolutionary.

In 1968 Ole-Johan Dahl became a professor at the University of Oslo, and was paramount to the establishment and development of the Department of Informatics (which celebrates its 40th anniversary this year). Later Kristen Nygaard also became a professor at our department. Kristen Nygaard and Ole-Johan Dahl received the Rosing Honorary Award in 1998, as the very first to receive this award. In 2000 they were appointed Commander of the Order of St.Olav. They received the John von Neumann Medal in 2001 and the Turing award ("the Nobel Price for informatics") in 2002.​

Simula represents a proud part of our history, marking a turning point for informatics and data security. The department of informatics is today ranked as number 12 in the global Shanghai ranking. Quite an accomplishment! The legacy of Ole-Johan Dahl and Kristen Nygaard is nurtured, and used as an inspiration both for the department and for the rest of our university.

The department is characterized by high quality research, and recently celebrated its 100th female Ph.D. candidate. Should I suggest an ambition for the department to take with them into the future, it might be to increase the amount of female professors.