The primary objective of the project is to acquire new knowledge about the fundamental electrophysiological mechanisms that enable working memory, prediction and attentional control in the human brain.

These basic cognitive control functions mentioned are critical for goal-directed thinking and behavior, and are crucial aspects of cognition that enable humans to successfully engage their surroundings. We hope to elucidate how networks of neurons in the brain cooperate when people perform tasks that make demands on participants' focusing of attention, anticipating upcoming stimuli, working memory, and other cognitive control functions. It is our belief that this will facilitate identification of the neural mechanisms by which the frontal cortex controls distributed neuronal ensembles in other brain regions that are engaged during higher-order cognition. 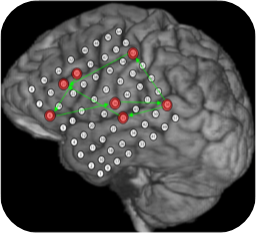 By recording electrophysiological activity from electrodes directly attached to the surface of the brain or implanted in the depth of the brain, we are beginning to gain novel insights into the brain's oscillatory dynamics when performing cognitive tasks. Our ability to record directly from the brain is possible due to a unique population of individuals that opt to have electrodes implanted in their brain. These electrodes aid doctors in the process of localizing epileptic activity prior to surgical treatment for drug-resistant epilepsy. This method is called electrocorticography (ECoG). ECoG is a powerful technique with unparalleled temporal and spatial resolution that permits detailed examination of the dynamic interplay of cortical processing within local- and across distant brain regions. No other electrophysiological recording technique offers the same precision, timing, or ability to observe cognition in real-time.

Over the past few years, we have recorded data from the brains of the majority of adult patients who have undergone intracranial EEG monitoring at the Department of Neurosurgery at Oslo University Hospital. All of these patients have participated in experiments designed to highlight the neural activity at work in directed attention and working memory. In conjunction with our ECoG recordings, we have also had the opportunity to record EEG data for the same experiments from neurological patients that have focal lesions (typically resulting from brain tumors) and from healthy volunteers. The integrated methodological approach that we utilize is beneficial because it allows us to test whether lesions to specific frontal regions disrupt the cognitive functions in question, and whether those regions play a key role in modulating the task-related electrophysiological activity we are interested in. By analysing ECoG data, EEG data of neurological patients, and healthy EEG data we are able to examine how the brain manifests higher-order cognitive functions at varying levels of ability and what anatomical regions are required.

The Norwegian part of our team is composed of clinicians and researchers at the Department of Neurosurgery - OUS Rikshospitalet and the Department of Psychology/RITMO - University of Oslo. In collaboration with the Norwegian cohort are our colleagues at the University of California at Berkeley (USA). Data are recorded both at a Norwegian hospital and at US hospitals. Because ECoG data in Norway are only collected at Oslo University Hospital, combining data from Norway and the US greatly increases study participation and the feasibility of the project. Thus far, our international team has published high-impact scientific articles and given presentations at conferences on topics such as the characterization of bidirectional oscillatory communication that supports working memory; defining a network of frontal and temporal regions that support top-down and bottom-up driven attention; and how the interplay between low and high frequency oscillations supports perception. More joint scientific reports have been submitted or are in preparation that are expected to provide new and groundbreaking insights into the neurophysiological basis of key control functions in the human brain.